Last Christmas, we explored how people played and spent during the festive season. This year, we’re taking a look at which new devices show up most at Christmas and how the contents of Santa’s sack have changed year-on-year.

We took a sample of half a million new players from Christmas Day and Boxing Day in 2017 and 2018. In order to make the data more digestible, we focused on handheld models in the US and UK that appeared more than 50 times in the list. Due to the dominance of Apple products in our initial analysis, we show their devices separately.

We can’t say for sure that these devices came down the chimney, but it’s reasonable to expect that a significant proportion will have been gifts of some sort.

First up, it’s the movers and shakers. The American top 5 has been remarkably stable, with only iPad switching places with LG. The bottom half of the table was more lively, with strong rises from Moto and Google thanks largely to the G6 and Pixel 3 respectively. The steep drop in ZTE in 2018 will inevitably have been connected to sanctions imposed by the US government. 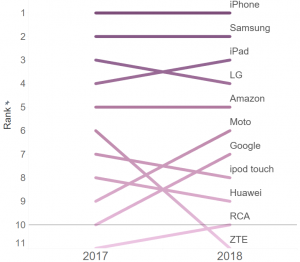 Check out the table below. The iPhone clearly made a lot of Christmas wishlists in 2018, covering over half of all the new devices in our sample. Looking down, Samsung managed to maintain it’s silver medal and keep Apple from landing the duopoly.

We see a lot more movement in the UK chart, with only iPhone and Lenovo holding their positions from 2017 to the next year. Nokia broke into the 2018 chart with the Nokia 1. Huawei grew strongly in the UK (despite falling down the rankings in our US sample) but will this be reversed in 2019 following the Google ban?

As it was across the pond, Samsung once again took second spot. Rather than simply holding on, however, 2018 saw Samsung devices leapfrog the iPad and breathe new life into the festive fight between Android and iOS.

So there you have it – the famous song is wrong! We don’t track partridges or pear trees, but an iPhone seems much more representative for the first line of the iconic carol. Apple continues to dominate the holiday market and keep things consistent up top but, a little further down the rankings, there’s a lot of movement.

Perhaps you’re reading this article on a freshly unwrapped gift. Was it the one you asked for?

If you have any questions, about the contents of this piece or anything else, contact us at [email protected] and we’ll connect you to the relevant person.
Tweet0LinkedIn0Share0
Recent Posts 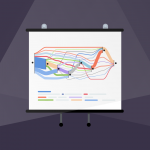